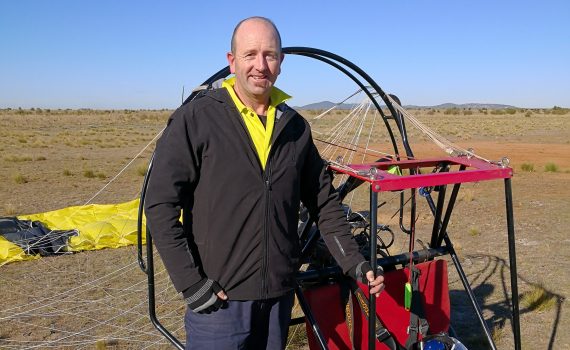 Ever since I was about 15 I had this dream of flying. I loved everything and anything with altitude. The higher I was, the better. As a kid I would always climb on roof of the house and look over the other houses to get a better view. I wanted to make flying my profession so upon leaving school, I drove to Moorabbin airport to investigate flight schools. In my investigations, I learned that you needed at least 1000 hours flying time before any commercial airline would accept you into their programme. Flying for Qantas would have been a dream come true. However my dreams were soon crushed when  I  found out to obtain a commercial pilots licence would cost in excess of $20,000 and to gain 1000 hours flight time meant trying to find a job in the aviation industry and as a rookie is not easy. I was told that the best way to gain hours quickly was to move to remote areas of Australia where flying is the main source of transport. Not only was $20,000 an extreme amount of money back in those days (1990), my parents were not wealthy and I had just left school, so the thought of moving so far away from home was daunting. So my dream was crushed and  my studies then lead me into Engineering as a metal fabricator. The money was good and this is where I have stayed until today. I still had a love for flying and found myself taking Joy flights where ever I could. I did an acrobatics flight in a Pit Special over Queenstown in New Zealand. I also went Heli-skiing whilst in New Zealand. I got to fly to the first ever Australian Grand Prix held at Albert Park in a Bell 206 Helicopter. I was also lucky enough to have many helicopter flights as my wife’s father worked at Jayrow Helicopters as the chief engineer. I also did a flight in a DC3 over to King Island just to go there for lunch. Something to do on a Sunday afternoon. These are just some of the many times I took to the sky, unfortunately it was with someone else at the controls.

Then in September 2016 a good friend of mine Rick and I were talking about our exploits of flying and our love to actually fly. Many years ago Rick mentioned to me he was taking flying lessons to obtain his Private Pilots Licence, but recently was looking into powered parachutes. He showed me some videos. “Now that looks awesome” I said. Rick owns a large property out the back of Tarneit, west of Melbourne and his recent investigations led him to Aerochute Industries. Rick and I both thoroughly investigated the safety of powered parachutes and found by all accounts claimed to be one of the safest forms of flying in the world. So it was decided this is what we want to do to finally fulfil a dream and a phone call was made to Stephen Conte from Aerochute Industries. Stephen is the founder and Chief Flight Instructor for Aerochute industries and talked to us about all aspects of flying his Aerochutes. It all sounded so perfect, so a booking was made to do an Introductory flight in November 2016 with Stephen.

The trial flight was nothing short of amazing and exhilarating and Stephen showed us how easy it was to fly an Aerochute. We did some low level flying and many turns at Stephen’s training ground. As we were flying, Stephen said over the intercom “take the controls and turn left and then right.  “Are you sure” I was thinking, knowing there were 2 sets of toggles so Stephen could control the Aerochute at the same time.  “I thought this is fantastic”. As I pulled down on the left toggle, the Aerochute began to banked left. Then a pull on the right toggle and off to the right we would go. It was so easy to fly and the view we had all the way to the City of Melbourne left me wanting more. Then over the intercom as we were flying in circuit,  “Were are going to do some touch and go’s” Stephen said. Touch and go’s are were you land and take off again.  Stephen made the landing feel so smooth, I couldn’t believe it. Four years ago prior to this day, I had broken my back in 3 places and have 2 titanium pins supporting my L1 vertebrae.

While my back feels 100% today,I did have a slight concern that the landing would be a little bumpy and maybe cause some aching in my back. However, not the case in the Aerochute. Stephen made the landings so soft that you could hardly tell you were back on the ground and then as the engine roars,  you are off completing another touch and go.

It was that moment despite the exhilaration and adrenaline pumping through me that this is what I wanted to do. After a few touch and go’s, thinking that was the end of the ride,  Stephen said “you can do a touch and go now”. The feeling of nervousness and excitement with some adrenaline thrown in as well was overwhelming. I was actually flying this thing and it feels amazing. Under his expert tuition, I circled the runway and lined up for my first touch and go. With Stephen coaching me through every step, I still couldn’t believe I was flying.  As we lined up the runway, concentration levels at the highest, ground rushing up at me, running through all the checks, then the  instruction came over the radio to “flare the parachute” and the Hummerchute we were flying gently touched down. “full power” was the next command and we were off flying again. “Did I really just do that” I said over the intercom. “You sure did” said Stephen. Wow, I can’t believe it and it’s so hard to put into words the feeling of flying an Aerochute, you just have to experience it yourself to understand. With no cockpit in your way, the air blowing in your face, un-obstructed views and knowing you are flying in one of the safest aircrafts in the world, I was hooked.

The introductory flight lasted about an hour in the air which in reality,only felt like 10 minutes, but it was time to land. After landing, the feeling of satisfaction and excitement was amazing. I was almost lost for words, which is unlike me. I shook Stephen’s hand and said “thanks so much for that, it was simply awesome”.

The smile on both mine and Rick’s faces said it all. This was it,  this was what we wanted to do. All the way home this was all we could talk about. For weeks after both Rick and I would call each other and talk about that day and how we need to enrol to do out pilots licence with Aerochute Industries. Whenever Rick and I got together, flying and Aerochute was the only topic of conversation. I’m sure our families were getting sick of it.

Then it was decided. It was time to enrol and a visit to the Aerochute factory in Coburg, we were shown how the Aerochutes are designed and built. Stephen also explained the steps taken to obtain CASA certification on his Aerochutes. With all the boxes ticked, we decided to book in for the training course.  This is finally real, this is really going to happen. I couldn’t sleep that night whenI got home due to the excitement. I became an overnight weather expert and I watched the weather forecast and waited in anticipation for Stephens phone call to say the weather was right and we will be flying this weekend.

Then the phone call came and we were to be at the airfield at 6.30am Saturday morning to start training. That night I was like a little kid on Christmas eve. I couldn’t sleep due to the excitement. Next minute the alarm goes off and I jump out of bed and get ready. Off to the airfield to start my dream. Rick was already there are well, obviously as excited as me.

Stephen showed us around and introduced us to James who is another flight instructor. We were showed how to do a safety checks over the aircraft and then a pilots brief on wind direction,  runways, flight circuits,  safety and basically how the day was going to run.

We then warmed up the aircraft and moved out onto the run way to set up the Aerochute. After being taught all the correct procedures in setting up the Aerochure, both the machine and the canopy,  it was time to climb aboard with our instructors. A check of our comms complete, checking the wind direction done, Runway clear, harness secure, “CLEAR PROP” was the next command and the Aerochute roared into life.  A small amount of acceleration and the canopy began to fill with air from the prop. As we slowly crept forward and the canopy centred directly over head it was  full power and up into the air we went. It was amazing how quick and easy the Aerochute can take off.

Without boring you with all the details, both Rick and I spent the next several weekends flying beside an instructor leaning all the technical aspects and emergency procedures of flying an Aerochute. We had completed just over 5 hours flight time  when Stephen said, “tomorrow we’ll do a dual flight check for solo”. That means if we pass and Stephen is satisfied we are competent, the next flight we will go up on our own.

During the flight check, both Rick and I demonstrated the necessary skills to satisfy Stephen that we are ready to go solo. With the solo examination complete, Stephen said we are both ready. So the following weekend it was time to do our first solo flight. Being a little nervous, but knowing we are in good hands and constant radio communications with Stephen, the first solo flight was totally exhilarating. Whilst enjoying the scenery from the air, Stephen maintained constant radio contact from the ground and  was observing us closely.  Whilst flying over the training ground, a herd of kangaroo’s were moving south, hopping graciously along the ground, what a sight. Looking at the horizon I could see the coastline around the bay. Looking a little further east and there was the city skyline. Wow…what a view!

Knowing that I am now flying by myself, whist still respecting the limitations and keeping constant vigilance on the task at hand, I realised, I have finally fulfilled my dream.

Rick and I continued our training until we reached the required flight time and were granted our pilot licence to fly.  With an Aerochute each on the trailer, pilot licence in hand we were ready to let the adventure begin!

I just want to thank Stephen and James from Aerochute Industries for their professional tuition and for enabling me to finally live my lifelong dream. 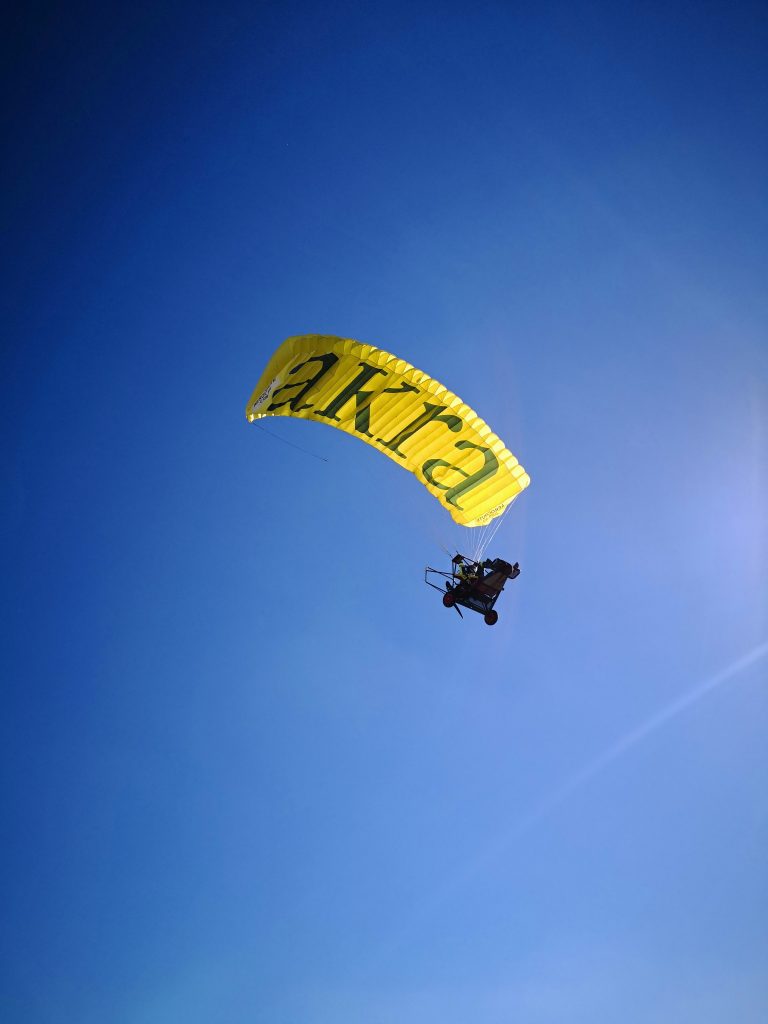